The original website the story was on created in 2007 or so was dedicated to The Enforcer’s dog Medusa and cat Elvira that shared the apartment with Vlad The Inhaler as it formed. 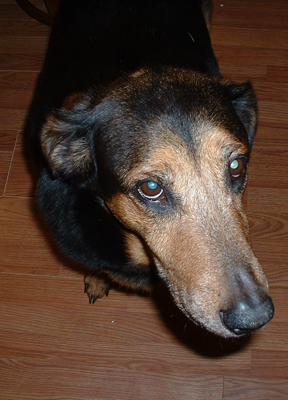 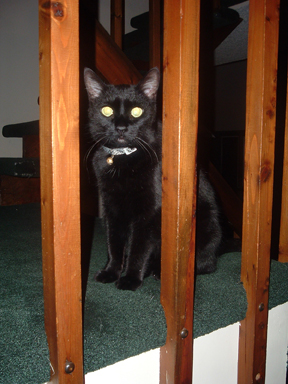 Vlad The Enforcer (Myself), went to The North Shore Animal League with Vlad The Beholder back in January of 1994. We came back to the Vlad apartment with a 3 week old German Shepard Doberman mix, and a black cat approximately 1 year old.

Vlad The Enforcer and Vlad The Whip battled the landlords to keep the pets and won. The argument was simple, and true, we went and got a cat because there were mice, and a dog to protect our musical equipment because they wouldn’t fix the locks. After several hours of debate, well maybe one hour, the landlords gave up, exclaiming we could basically do what ever we wanted.

After leaving Jersey City, Vlad The Enforcer brought Medusa and Elvira to Middletown, where they had a good hopefully happy home for more then a decade.

On September 25th 2005 Elvira the cat passed away. She had many health problems at this point including an enlarged thyroid, FIV (how she all of a sudden got that made no sense), and finally a cancerous tumor in her stomach. We tried Chemo, but to no avail. The tumor did her in. I came in one day and found her lying by my bed, moaning, waiting to say goodbye. She basically died in my arms waiting for the vets to see her.

On December 2nd 2006 Medusa had to be put to sleep. She was a 120lb dog who had bad back legs for several years. On high doses of arthritice medicine, she was doing fairly well until a few months before her passing, she developed a bone cancer on one of her two front legs. The cancer was removed as a mass, but was still in her bone. Now down to one good leg, it seemed she was now in just too much pain. The doctor felt she was just too proud to show her pain, and she seemed to be giving up.

Much Love and Dedication.

The Beginning Website: Band Bios | The Anointed | Vintage Vlad Art By The Whip